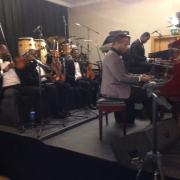 Ricks Entertainment is a multi-faced Event/Entertainment outfit. Our band is a 14 man (with options of an orchestra) multi-genre live band. Formed in 2007 our band has featured in various events, locally and internationally and our music repertoire cut across different genres from classical to pop, soul, hip-hop, R&B, jazz, highlife, etc. Our band has been the part of core band at the Africa Magic Viewer’s Choice Awards (AMVCA) 2016, 2017 and 2018, showing our strength at the cocktail as being the only known band to hold a five hour jam session as appraised by the guests at the event. We have played at the grand finale of Multichoice Africa’s block busting series Hotel Majestic, on TINSEL “episode 1931” wedding scene and for the movie premiere of “76” - best movie of the year 2017. We have been the main band for Total’s USAN concerts since inception, among various feats too numerous to mention. We have played alongside various International and Nigerian artistes. call on [hidden]

No reviews on this vendor yet!

Got an event? Get in touch with Ricks Entertainment directly.

Enter your details below and we'll send you the contact details of Ricks Entertainment via SMS.

We have sent the contact details of Ricks Entertainment to {{ sc.customer.phone }}. Thank you for using Planit.